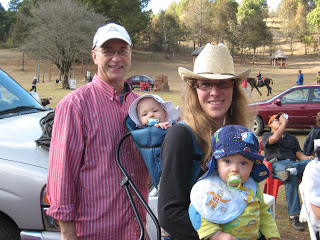 It’s been 102 days since my last post (from Canada). Time sure does fly when you’re having fun. I really missed being in touch and having access to the internet/email/our website. My writing skills are a bit rusty so bear with me.

In a nutshell, Mexico was a complete success! All of the Zoo was healthy; except for a 2-day flu that I got and a 2-week cold (limited to a stuffy nose) that we all caught. The weather was amazing; the warmest it’s been for years. Our friends were glad to see us so the parties never ended. We held a weekly (Sunday) “Bazaar” that made us the talk of the neighbourhood and allowed us to get rid of tons of unused stuff. 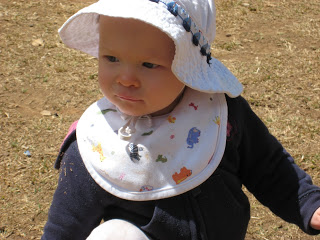 We left San Cristobal de las Casas, Chiapas, Mexico at 6:40am on March 17 and drove into the driveway at my Mom’s house (in Toronto) at 8:15pm on March 20. The drive home was in record time and with record “peace”.

The kids were amazing, content to spend up to 16 hours a day in their car seat, the cat meowed for less than 15 minutes total (usually she meows for 2 hours every morning), the dogs both sat/lay on the front seat (which left me with more leg room in the back) and Ed drove almost 60 hours with little sleep (and no complaints)! 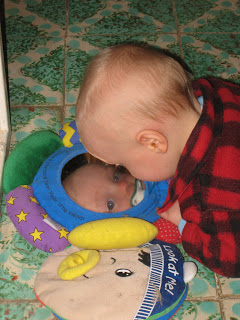 My job was to keep the kids amused, pump (4 times a day) and feed everyone. We stopped off for groceries so that we didn’t have to eat McDonalds for 4 days. Besides, it saves on money and time (two things close to my heart…).

We spent the 21 and 22nd visiting with the Abuelos, Uncle Andrew and Fred and headed back to Ottawa on the 23rd (Ed had a meeting in Ottawa on the 24th, no rest for the wicked). When we arrived home, the house was “almost” exactly as we left it. Except for the little problem with flooding… Thankfully, “Eric the Sheriff” had replaced out our non-functioning sump-pump and Ed had taken everything off the floor before we left so there wasn’t any damage (just a very wet carpet). We rented an industrial fan for a couple of days and all is as it should be. 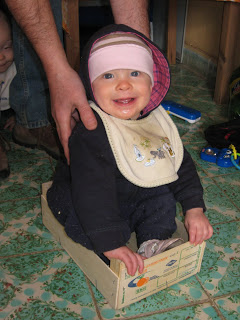 During the day on Friday, Ethan and Christina came over for a playdate and Christmas present exchange. Presents in March, how lovely!

On Friday night, we went to Finnertys (we’d missed 14 sales but who’s counting…). Unfortunately there wasn’t much (like a microwave and/or toaster as I took ours to Mexico) so we went to the Five Star for dinner. All the servers were happy to see the kids and they behaved (as usual).

As soon as I got the chance, I headed to Lazarus house for my “fix” and to buy the kids some clothes. For the past month, they have been growing like weeds and no longer fit in any of the clothes that I took to Mexico. In fact, I had to buy them some new clothes in Mexico. Artemis went from 3 month old sizes directly to 6 month olds. Max is in 12 month old clothes. I have to book their 15 month doctor’s appointment so we can officially see how much they grew (and gained). 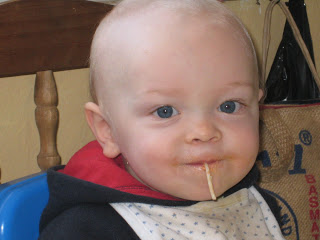 Ed is busy with work (which is great) and has a business trip to Edmonton scheduled for April 4-10. For those of you who don’t know, it was originally scheduled for March but he postponed it as he’d already been on a busines trip (from Mexico) to Halifax in late February (for 5 days). I stayed in Mexico with the Zoo.

Unfortunately, Great Aunt May and Great Aunt Margaret have recently passed away. We feel so fortunate that they were able to attend the kids Baptism in July (May is Father Allan Hood’s Mother). They will be remembered fondly.

Upon our return, we found out that Sarah’s cousin Jonathan and his wife Carrie are expecting a pink bundle of joy, due in June 2011. We can’t wait for the kids to meet their new cousin.

The kids have been walking for a while (Artemis since the New Year and Max since February 1). We have yet to transition to cow’s milk (I’m still pumping) but it’s coming, sooner rather than later. They’re really good eaters and I’m excited to see how much they’ve gained. They still have 6 teeth each (4 on the top, 2 on the bottom) but are teething a lot. Max talks constantly (tons of different sounds, nothing coherent) and Artemis is vocal as well. It’s so interesting to see all that they do understand. They know what their names are and are able to come and/or pass you things. Very useful…

I’m sure that there’s so much more to share but I’ve forgotten. I’m still tired from the two hour time change (Mexicans “Spring Forward” but not until April) and all that is involved in raising two 15-month old toddlers.

And a few more pictures. 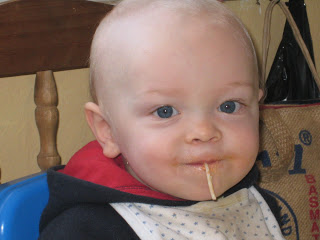 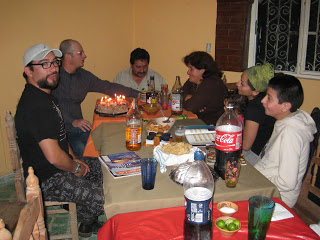 And So Another 5,000km Road trip Begins…

If You Are What You Eat, What Does That Make The Zoo?