I did the unthinkable.

I posted not one but three pictures of the inside of my toilet.

It’s not my fault.

Wait, don’t hit that little “x” up in the top right corner yet. Hear me out. Your toilet might just thank you…

Now before you think what a wack job or I would never do that how brave I am. Let me assure you, bravery would have been taking a picture BEFORE I cleaned it.

We take our water from a well so it’s hard. Like really hard. Not sure if you’ve ever seen a toilet after four years of “torture by hard water” (and you won’t see one from me, I’m not that crazy, truth be told, I forgot to take a picture, I would totally have posted a picture of that) but it’s not pretty.

I’m sure you’re thinking, why not just get a water softener and be done with it. First of all, then I wouldn’t be able to blog about it, secondly, I love the taste of our water (I love the taste of most water, if you think that water doesn’t taste different, well, that’s a whole other post), thirdly, have you ever showered with soft water, might as well have a shower in slime and last but not least, it costs money and I’m frugal.

Over the years, we have tried everything. Well, we thought we’d tried everything. We’d even gone into Ottawa to purchase several products from specialty stores (at over $20 a flush). None of them worked. And not for lack of elbow grease. We pretty near sprained joints that I didn’t know existed trying to get the bowl clean.

It was so bad that people would ask us “what’s up with your toilet”. In the back of their minds, I’m sure that they were dreading the response, I mean, what if I said it was well, you know.

That was until we found this.

It all started when Uncle Eric showed up and handed me this blue bottle and told me to try it.

Three days later, I managed to coordinate the application of said product before bedtime and in the morning, presto, half the stains were gone and I hadn’t even torn a rotator cuff. The next night, I drained out some of the water and applied again. Almost gone. And the next night, you guessed it, it was as new as the day we bought it (I won’t go and say “as clean as” or “clean enough to eat out” of because well, that’s gross).

Don’t listen to me, you be the judge. 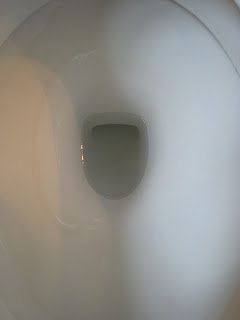 Pretty clean huh! Can you see my reflection in the third picture? Gross Neat huh!

Have you Ever Tried Lysol Toilet Bowl Cleaner?

Disclosure: Journeys of The Zoo was not compensated for this post in anyway (unless those coupons that I cut out of the paper count). I think the fact that there’s a sticker across the brands name (which I didn’t place there), says it all but just in case. Not that I wouldn’t be open to the idea…

Special Note. Since I was able to determine (within one week) that the product worked like a charm, I was able to take advantage of the weekly sale to stock up. But not before I received a “two-for-one” coupon in the mail the day before. Priceless.

All Things Maple Syrup with a Side of Bribery