For the past three years, The Zoo has attended The Dandelion Festival. Held on the last weekend in May, it’s North Grenville’s premiere festival showcasing our rich artistic and musical talent.A favourite with our family is always the Farmers Market, Big Sky Ranch (a local animal shelter), Volunteer Fire Department, storytelling at the library and buskers in the streets.

This year, the event was once again held at the Park which I’m not a fan of. I don’t mind that they’re charging a small entry fee ($2 a person) as there are a lot of costs associated with the event, however, it felt really small and cars were allowed within the cordoned off area. It’s hard to keep track of two young kids at once let alone in an area with cars. The weather was cool and overcast but that didn’t dampen our spirits.

The Kids got more involved this year and added the following activities to their favourite list; colouring, live music, dog agility exercises, playing in the bouncy castle and sliding down the 3,499,456 foot giant air slide. I might be exaggerating slightly on the height dimensions 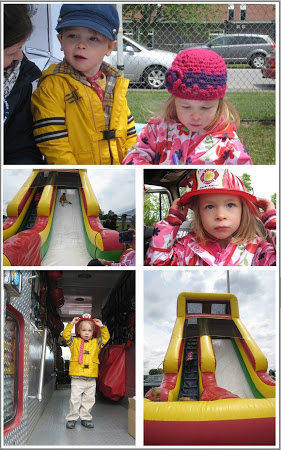 I didn’t realize how high it was until Artemis started climbing and was this little speck. By that point, it was too late to get her and there was only one way down. I probably wouldn’t have agreed to it but Max had already gone (and survived).

The Kids each received a fireman’s hat to take home and I’ve had to peel it off their heads before they go to bed.

Speaking of which, I’ve started a new bedtime routine called “What was your favourite part of the day”. You may recognize it from Kids Say the Darndest Things.

On the eve of the festival, Max told me that his favourite part of the day was petting the Camel, Horse and Mountain Goat. Translation: Llama, Pony and Goat. Life is more exciting when you’re a child.

Have you Ever Been to the Dandelion Festival?

14th Annual Dandelion Festival Heads Back to the Streets

Changing the World Starts with One Person… You #uwHero