The Zoo spent last week (three nights, Tuesday to Friday) in New York City. There’s so much to tell that I don’t even know where to begin.

I could tell you about the drive (658 km which took us nine hours due to rush hour and stops) complete with rain, hail AND snow! That we passed; Rome, Liverpool, Mexico, Columbia and Moscow. We get around.

I could tell you about how Nanna gifted us a hotel room at the Loews Regency Hotel (thanks Nanna) and that they upgraded us to a 1,500 sqft, corner suite complete with; 2 bedrooms, 2.5 bathroom (each room had a four-piece ensuite), walk in closets as well as five others, three 47″ plasma tv’s, a foyer, living/dining room and kitchen. That the kids spent all their waking hours (while in the suite) counting taxi’s (a never ending supply).

That we spent the first morning at the Central Park Zoo and Petting Attraction. Perhaps the highlight of our trip (only beat out by Wednesday night, see below for details). We saw penguins and seals (during feeding time), monkeys, walked right by a peacock in “The Rainforest” (really hot but really neat, birds were flying everywhere). And we spent the afternoon at the American Museum of Natural History. The kids weren’t big on Dinosaurs but they loved all the dioramas of the African Animals (elephants, lions and tigers, oh my).

I won’t even bother to tell you about the lovely dinner that Ed and I had out on Wednesday night (Andrew babysat) at an Argentinian joint (food was amazing, service was cr@p). That we were offered tickets to the |Late Night with Somebody” (by a guy in a nice suit and credentials). We don’t actually know who it was for (this kind of stuff happens to us all the time) but we think Conan O’Brien. That at the end of the night, we found ourselves in the biggest dive in all of New York City “Arthur’s Tavern”.

The bar came complete with decorations for any holiday (Hanukkah, Christmas, Valentine’s Day, St. Patricks Day, the list goes on), Accepted Cash Only (I only saw cash being taken out of the ca. 1900’s register), Bob Marley and Tom Waits (look-alikes) and a true representation of the diversity of New York City (we saw everything, I’ll leave it at that). And last but not least, “The Last of the Red Hot Mamas, Sweet Georgia Brown” who turned out to be my drunk friendly stool mate. She alternated between pulling “everything but the kitchen sink” out of her bosom (at one point I asked her what else she had in there, we’d established a friendly rapport within seconds during our visit, her response “money”) and telling me how famous she was (aren’t we all!?). That she was B.B. King’s “Right Hand Mama”. Turns out, she wasn’t lying. Anybody want a signed CD?

Sorry, Sweet Georgia Brown wasn’t the last or least. What evening wouldn’t be complete without a bar fight. No one was injured unless a bunch of glasses, picture frames and egos count.

Note that Ed carefully scoped out this particular location due to their “Open Mike Jazz Night” (no, we don’t sing). Believe it or not, we weren’t the only crazies Canadians in the joint as there was a couple from Winnipeg (they totally belonged there). Never a dull moment at The Zoo.

Or I could update you on how our second day was spent riding the subway for three hours visiting the New York Aquarium (on the boardwalk in Brooklyn). Unfortunately, all the interactive exhibits were closed for cleaning (walruses, seals, penguins), but there was still a lot to see. On the way home, we stopped off at FAO Schwartz to see the Big Piano (from the movie Big with Tom Hanks, yours for only $250,000, yes, you read that correctly). The kids chose to spend their entire time playing with a wooden train set (kind of like this one). Needless to say, Ed is currently looking to purchase one of our own.

The final night, Uncle Andrew got to go out on the town. He stopped by Radio City Hall, Times Square, had a drink at Trump Towers and caught Game 7 of the New York Rangers/Ottawa Senators game… on TV. Remember how I wanted Ottawa to lose the other night and even posted about it so that we could see the game live in New York City on Wednesday night. Well it turned out to be on Thursday night and Ottawa ended up losing…

How we ate lunch at the Best Cuban restaurant in the city, Café Habana and even found free parking a block away. How it was 16-18 degrees and sunny every day and evening and only misted for one hour (while we were having lunch).

Everyone Ed had psyched me up for huge, ginormous, mammoth city blocks but I didn’t find them so big. I was however surprized by how big the city was. It goes on forever and every corner is packed full of things. It reminded me of Mexico City. Central Park was lovely and came complete with several lakes. I could definitely spend more time there watching people time go by.

I had also been warned about how New Yorkians (does the term even exist!?) were self-centred, egotistical, jerks not so friendly. I was not disappointed on this front.

But if I wrote all of that, you’d probably be jealous bored to death. If I had to sum it up in one sentence I’d say “New York is well, New York” (feel free to quote me before or after I become famous). If you want to see what other smarter people had to say, go here.

And now for picture overload!

The View (from our Suite) 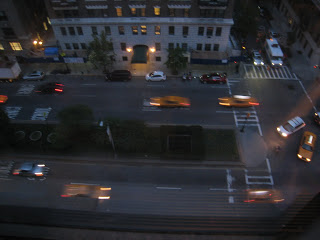 Tuesday Night Dinner at Serafina (Italian Joint, the picture was taken at 11pm) 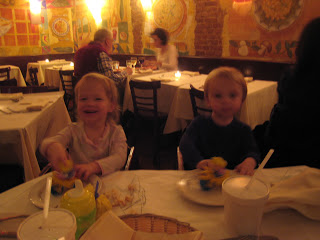 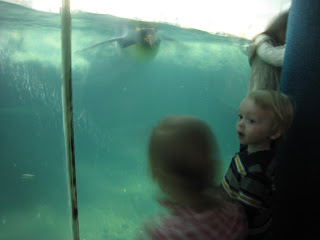 Feeding Time at the (Other) Zoo 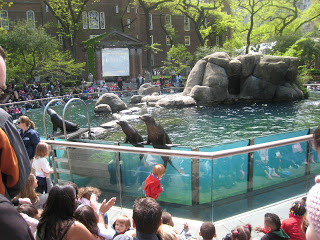 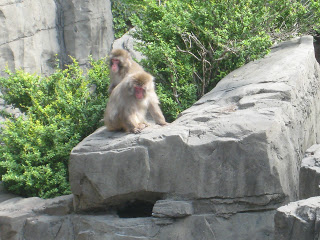 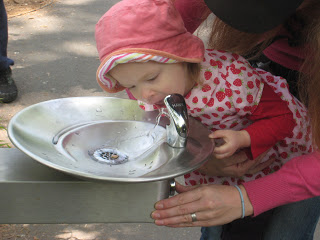 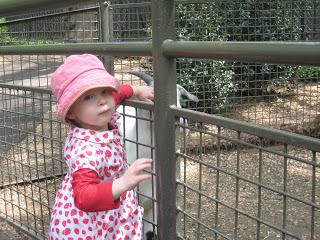 The Thief. This picture needs an explanation. Good thing that Ed took a picture because otherwise I would have forgotten about it. While on route to lunner (a late lunch, almost dinner, hence the use of soothers as the kids were tired, we ate at a Peruvian diner, yum), we passed by a library that was having a book sale (in the bowels of the joint). Not one to miss up an opportunity for a deal books, I went in while the boys waited outside. When it came time to pay, the woman charged me for three books ($1.50). I only had two books and didn’t want to haggle (with the old broad) over 0.50 cents so I let it go. When I got outside, Ed solved the “Mystery of the Extra .50 cents”. Someone has sticky fingers. 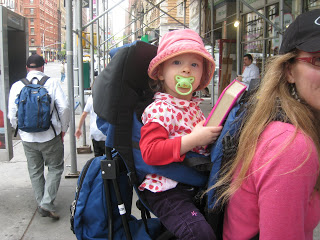 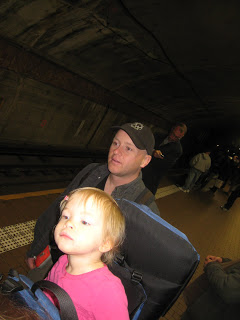 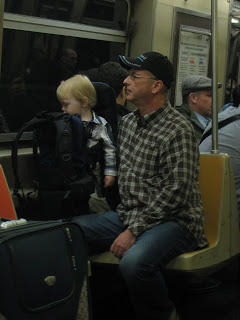 Hanging out in Soho 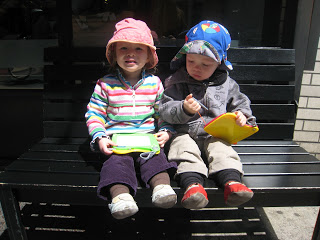 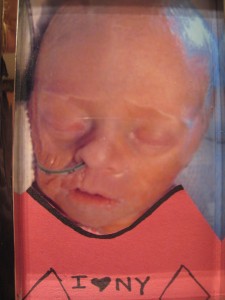 “My Parents went to New York and All I Got was this Lousy T-Shirt!”