No one knows why I didn’t go into preterm labour at 25w5d when Alexanders’ water broke. Why he (and the other two) decided to hang around for another 4w5d. While I knew that The Kids would be born premature*, I still wasn’t prepared. How can you be ready to have only one of your three children be able to breathe at birth**?

Not a day goes by where I don’t think of Alexander and remember how those eight weeks shaped me as a person. We are fortunate that The Kids are happy, healthy and normal four year olds because in some cases, like Alexanders, the babies never come home.

If you’re not familiar with our Story of Prematurity, we shared about it a few years ago. Today we would like to share with you another story of hope, love and life. Below is a piece of Lesley and Torran’s story.

Giving birth to a preemie is a having a big time lottery win and only taking home $1 of your winnings a day. On one day, you get a lump sum; the next, a pickpocket leaves you penniless.

At 19 weeks gestation, my water broke. I’d spent most of my pregnancy dealing with placental bleeding. This was the most horrible news a mother could hear in her second trimester. I had a condition called oligohydramnios, a lack of amniotic fluid. There was no proven way to fix the problem. Doctors advised me to terminate my pregnancy, to avoid the risk of death and disability in my baby. My heart struggled with the unknown outcomes, but I couldn’t end his life.

Luckily, my pregnancy lasted until 26 weeks and 6 days. The night my son, Torran, was born, a respiratory therapist whisked him out of the room before I could hold him. To save his life, I had to give him up. Later, after dealing with my post-partum complications, they let me place my fingertip in his tiny hand. He weighed less than a pair of running shoes. The tube in his nose stole his voice just as fate robbed me of my third trimester.

My Wee Man had a long journey ahead of him. I can’t remember a day when I didn’t cry during Torran’s 136 days of hospitalization. Yet, I’d suffer through those darkest days again if it meant bringing Torran home. We were the lucky ones. Torran faced death and won. Some babies never come home.

Like many NICU parents, my husband and I see the world through the filter of prematurity. Growing a Rainbow: The Premature Journey of a Two Pound Hero is the lens through which anyone who cherishes children can understand the trauma endured by families like mine. If you have a preemie in the NICU, or if you’re a graduated parent, I hope you see something of yourself in our story. Your feelings aren’t selfish or wrong. Anger, guilt and despondency were my first reactions to being a mother.

Sales of Growing A Rainbow support the Canadian Premature Babies Foundation. The Foundation aims to prevent premature birth and to reduce the impact of prematurity in Canada. Please support premature families on World Prematurity Awareness Day by wearing purple and purchasing your copy of Growing A Rainbow. Keep the conversation alive on social media with the hashtags #worldprematurityday and #preemiepower.

Here’s an excerpt from Growing A Rainbow:

When the doctors advised that I should terminate my pregnancy, my heart dissolved in my tears.

The technologist, Anne, squeezes the ultrasound gel bottle, making a wet farting sound. To prevent myself from giggling, I tell her about my plans for a baby shower. It’ll be nice to have an excuse to have people over. She reaches across me for a tricky picture. Her arm smells of hospital sanitizer. I crane my neck upwards trying to see my child moving in grainy shades of black and white. She frowns as she wipes off her equipment.

“You know that you don’t have any amniotic fluid?” she says, more statement than question.

One summer I rode the drop tower at Canada’s Wonderland. My heart thundered as the carrier rose 200 feet into the sky. The car released and I plunged down at 100 kilometers per hour. My lungs disconnected from my chest and I stopped breathing. Brief and thrilling at the time, that feeling hits me now, carrying doom in its wake. I’m frozen in an unbelievable moment. I manage to squeak out words.

“I have a subchorionic bleed, and one time they found an abruption,” I defend my uterus, “but that’s all.” Speaking prompts me to breathe.

“I have to get the radiologist to check the images. Sorry, I thought you knew. You know, it might not be all that bad.” She speaks quickly as she backs out of the room.

The detergent smell remains behind and suffocates me. The ultrasound gel on my belly decreases a million degrees. I get goose bumps, but it’s not from the cold goop.

Something is terribly, terribly wrong.

If you want two free chapters of Growing A Rainbow, sign up for my newsletter for my blogs RealWomenDriveStick.com and WriterLesleyDonaldson.com.

Do You Know A Child That Was Born Premature? 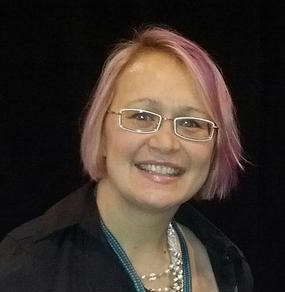 Between 12 hour nursing shifts and 24 hour parenting shifts, I redefined myself as an authorpreneur. Growing A Rainbow is my first published book, and I co-authored From Blog to Book. I’m a mother of a super-preemie with special needs, an often companionable wife, Canadian registered nurse, traveler and hobby medievalist. Under the pen name Lesley Donaldson, I’m writing The Queen’s Viper. It’s an urban fantasy set in Elizabethan and modern London, with a new take on UK folklore.

Note that we do not own the Prematurity Awareness Logo.

To show your support, wear purple in honour of World Prematurity Day.

* Average gestation for Triplets is 32w4d. For me that would have been Boxing Day.
** Max was the heaviest of the three weighing in at 3.5lbs so this likely had a positive impact on his ability to breathe with little assistance (CPAP).

Quest to Rediscover the Little Girl Inside (Canadian Feature)

Mama Bear Haven on Becoming a Mother at 41 (Canadian Feature)

How Shea Butter is Changing Lives in Ghana (Canadian Feature)

24 thoughts on “Prematurity: The Pain I Turned into Purpose #WorldPrematurityDay”