Max is one of those kids*.

We’ve known it for a long time and really, it comes as no surprise given who his parents are.

It first became very evident in the Summer of 2013. So much so that I wrote a post about how Max marches to the beat of a different drummer and titled it “Max and the Gingerbread Man**”. For whatever reason, I never posted it.

And then today happened.

The theme revolved around making a violin.

Day one, we had to walk downtown and get two shoeboxes from the kids shoe store***.
Day two, they cut out the silhouette of a violin and painted the cardboard.
Day three, we improved the structural integrity of the instrument and installed the strings.
Day four, we made a bow.
Day five was today. 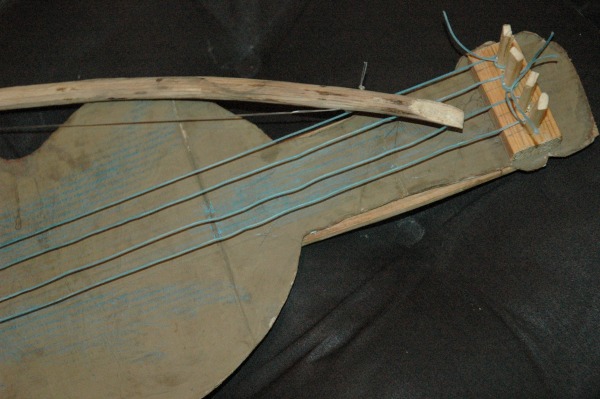 As usual, I dropped The Kids off at school around 8:50am. Except today, Ed and I entered the school with them. You see, all the kids, aged 3-6 years old were putting on a musical presentation for the Parents.

At least 250 parents and kids gathered to laugh, clap, dance and listen to music. And music there was. Violins and drummers and maracas and flutes. And, amongst all the (somewhat) organized chaos…

There was one boy playing a violin, like it was a guitar.

To his credit, Max always said that he was making a guitar and not a violin. He was very adamant about that fact. So much so that he said he wouldn’t perform if he couldn’t play his guitar.

So he did. And he was mighty proud of his performance. As he should have been.

And so were we.

Note that The Kids are the only ones wearing sun hats. You can recognize Max’s blue one that he’s had for five years…

Know of a Child that Marches to the
Beat of a Different Drummer?

*Note that we have no problem with Max being one of “those kids”. In fact, we applaud the person that he is.

** As for the original post from 2013. It all happened while we were at Claus Mueller’s Annual Pig Roast. Ed asked Max if he wanted a bite of his gingerbread man to which he replied “Yes”. Ed asked him if he wanted the leg or the arm. Max looked at the cookie, looked back at Ed, tilted his head and was silent for a few seconds. You could tell that he was thinking. Then he replied, “I’d like the head please”. And the head he got.

Note that I use the term “playing a musical instrument” loosely as none of them made any noise.