Growing up, recess, lunch and after school programs were my favourite school subjects. If the teacher mentioned the word Math or Science I was lost before I even began. It was all so confusing and there was no room for error. Even though I was so afraid, I remember being so excited for our annual field trip to the Ontario Science Centre. Why was that?

Since heading there with The Kids recently I realized the answer; the Ontario Science Centre presents Science in an engaging and creative way. So much so that you don’t even realize you’re learning and even if you did, you wouldn’t realize that it had to do with Math, Science, Astrology (you know, all the scary subjects). And here are some of the things that make it special.

OMNIMAX Theatre is Out of This World!

If you’ve never seen a movie in an OMNIMAX Theatre then this will be quite the experience for you. Projected onto a giant dome surface with a screen surface of 4,500 times bigger than an average TV screen delivering 13,000 watts of sound from 44 speakers, your senses will be overwhelmed. 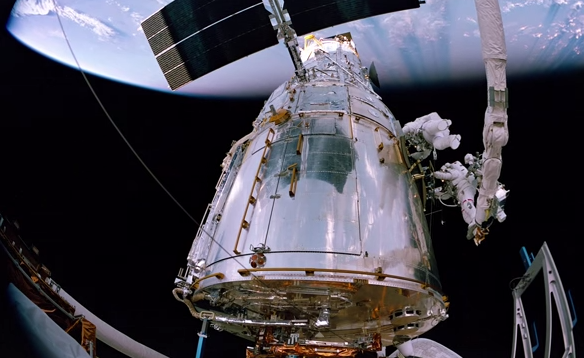 With several movies to choose from we decided to see the one titled “IMAX Hubble”. Wow! To say it’s out of this world would be a bit cheesy but it’s so true. We got to watch them repair the hubble telescope and then see images from within stars some 5,090,098,999,000,000 (you get my drift) years away. I really enjoyed the narrative throughout and while The Kids had many, make that MANY questions, they weren’t totally lost on the concept. To this day, they look up at the sky and ask about the stars and planets.

The only thing I didn’t like about the movie was that there were two “ads” of (maybe) 5 minutes each before the movie started reaping the benefits of OMNIMAX and it’s creators. We almost lost The Kids before it even began*.

After that, we were off to the Weston Family Innovation Centre. Even though there was a room full of experiments, Max was absolutely in awe of the Wind Tunnel. Kids could build their own rockets (with supplies provided) and then test for aerodynamic stability in the wind tunnel. Max just wanted to take all the scrap pieces of paper laying around and launch them. And repeat for 30 minutes.

In the meantime, Artemis and I took pictures of ourselves and manipulated the way we looked all with the touch of a button. Then we created music with water by playing the hydraulophone, a keyboard fountain where every key is a water jet.

Since we were on the same level (the Ontario Science is built into a hill and is on multiple levels), we thought that we would head to the featured exhibit, BRAIN: the Inside Story. On our way there, we noticed a bunch of kids up on their feet and dancing around. We took a seat and were taken on a musical and aerobic adventure to the tops of mountains and the bottom of the sea with JiggiJump. Geared towards Grades K to 3 it’s intention is to get kids moving and it did just that. The Kids remember it fondly.

Rhoads Sculpture is a Maze for the Senses

Needless to say, we never made it to the feature exhibit because we wanted to make the show at the Planetarium. However, along the way, we came across the Rhoads Sculpture (located just outside KidSpark). It’s a structure of intertwined mazes where you can watch and manipulate colourful balls. We spent an hour there as a family. It was incredible and never got boring. Just when you thought you had all the routes figured out, a new one would appear. Incidentally, we’d bought The Kids a marble run for their birthday (from Mastermind Toys).

KidSpark has Something for Everyone.

KidSpark is an exhibit hall specially designed for kids eight and under, even toddlers. With bright colours, simple language and sensory experiences, kids can participate in imaginative play and get their first taste of the science and technology behind structures, shape and colour, force and energy, music and sound, living things and nutrition.

Max was all over the car tracks and the wall made of plastic pins. Artemis was a fan of the hot air balloon, cave and musical instruments. They must have completed each experiment or exhibit 20 times. Each time with as much enthusiasm as the last.

Open from 10am to 4pm, I highly suggest that you arrive early and leave late. Truth be told, there is no way that you can see and experience all that the venue has to offer in one day. We missed the featured exhibit, Science Arcade, Jacquard Loom, Papermaking, Plantetarium and a visit to their Mastermind Toys Shop (we are huge fans!). But we were happy that The Kids got to move at their own pace. Besides, at only $130 for an annual membership** we didn’t worry because we knew that we’d be going back. Lockers were available for around a $1. We brought our own lunch and there were plenty of places with chairs and tables around the facility. Or, you can purchase food and drinks at 1 of 3 locations. If you don’t live in the Toronto area but want to experience the Ontario Science Centre then you can take an online Virtual Tour. They really have everything covered.

I could go on. And on and on. The bottom line is that you really need to make the time to visit the Ontario Science Centre. You will be amazed by how Science is Everywhere!

Do you Like Science?
Have you ever Been to the Ontario Science Centre?

Disclosure: Journeys of The Zoo received tickets that enabled us to complete this review.

Enjoy a Day of Family Fun at African Lion Safari!