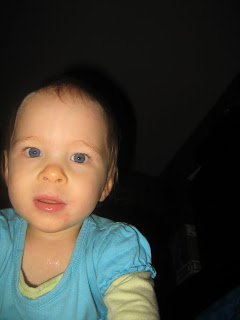 We spent Friday night at Finnerty’s.

It was the first time that the kids visited since they were little babies (probably 6 months old).

They were really well behaved (and didn’t get us kicked out). They enjoyed playing with the kids toys (that friends bought them), eating chips and climbing all over everyone.

There was only one little problem because I forgot the diaper bag (read: soothers and diapers) at home. The soothers weren’t needed but the diapers were…

On Saturday night, after the kids went to bed, Ed and I had a dinner to remember (or not, that’s why we took pictures). 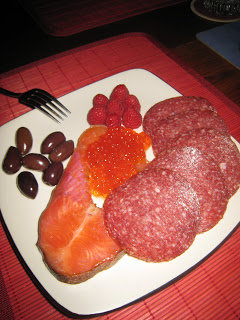 It started out with appetizers.

Russian Caviar, Russian Smoked Salmon (cut straight off the fish), Spicy Hungarian Sausage (also from our favourite Russian Deli that we’ve been going to for 10 years and was originally recommended by a Hungarian work colleague of mine at Nortel), Kalamata olives and Raspberries.

The only thing that would have made it perfect was a few slices of Cambazola cheese. Note that I actually went to the store especially for it but forgot as it wasn’t on my list. 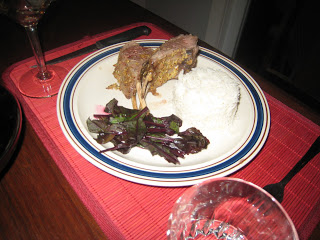 For dinner we had Rack of Lamb, basmati rice and beet greens (from the garden) with fresh ginger.

Besides the fact that we like good food, the reason for the fancy-schmancy meal was because Ed has been saving something for a rainy day and we decided that today (while lovely out and no sign of rain) was the perfect day. 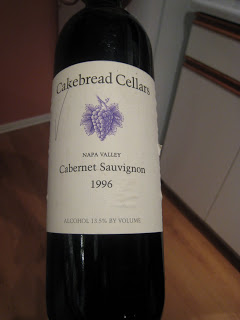 Tonight, we drank Ed’s bottle of 1996 Cakebread Cellars Cabernet Sauvignon, Napa Valley, USA. Here is what the winemaker had to say;

We have several other bottles that we’ve been saving. One is a bottle of 1999 (something or other, red) that we bought in France in 2001 and a couple more that are around 10 years old.

The 1996 Cabernet Sauvignon, with its attractive garnet colour, releases scents of plum, cedar, and vanilla. Mild, smooth flavours of red currants and plums build on the palate and linger through the long finish. Mid-palate, hints of chocolate and mint emerge. The predominant characteristics of this wine are its overall roundness and lingering aftertaste. 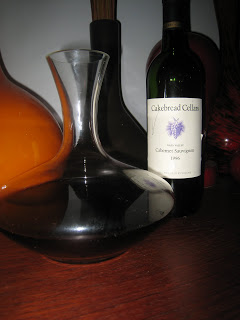 I’m not sure whether it was the wine (the older a wine gets, the higher the sugars) but shortly after the start of Octopussy (#13 in the series), I fell asleep.

I’ve seen this movie before. I saw it in the movie theatre in 1983 (at age 11). I went there on a triple “date” with Peter Smythe, Mike White/Jenny Mullins and Amanda Smith/Toby Morrison. Eleven sounds so young but I can remember feeling “so mature” at the time.

Ed stuck it out and gave it a rating of “8”. I will need to watch the movie again this week (while Ed is away).

On Sunday we watched “A View to a Kill” (1985) which is #14 in the series. I had not seen it before. It was really good. It was almost up there with my favourites but something (I’m not sure what) was missing. The sound track (by Duran Duran) was really catchy. I rated it an “8” and so did Ed.

In July, Aries had an altercation behind the BBQ and got an eye infection. Well, the antibiotics never made the infection completely go away. That’s because a side effect (of the infection) caused her eyelids to turn in. Therefore, the hair on her eyelids was scratching her cornea and constantly infecting her eyes. So, today, Aries had entropion eye surgery. 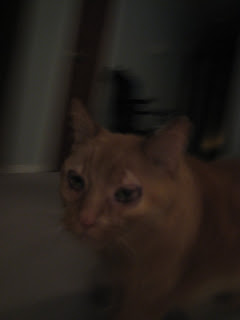 In the morning, Eric (and Sandra) kindly drove Aries to the vet in Ogdensburg. They were going to mail a package and offered to save Ed a trip. On the way home, Ed conquered Thanksgiving traffic (I didn’t think that it would be that bad but he had to wait 1.5 hours at the bridge), and Aries was still walking off the effects of the anesthetic (she was falling all over the place). Her eyelids look worse after the surgery. A small price to pay for some more quality time with our 16-year-old cat.

Yes, this is the best picture of the lot.

The next movie in the marathon is “The Living Daylights” (1987), the first of Timothy Daltons (two) movies. However, Ed leaves for San Diego tomorrow (on business) so we won’t watch it until Saturday night (probably).

Today (Tuesday) was another beautiful day. The alarm went off at 4:45am. By 6:45am, I had dropped Ed off at the airport and was back at home in bed for another hour (before the kids woke up). Eric came and walked the dogs (thanks for always looking after them Eric!). Nanna (who arrived yesterday) and The Zoo went for a long walk. Afterwards, we tried to get every ounce out of the good weather and we played on the jungle gym until the sun set and it got cold quickly.

Oh, I almsot forgot (well, actually I DID forget but the power of the internet lets me go back and update my post before you even noticed, maybe I didn’t forget at all…). The kids turned 22 months old today! Where has the time gone (that’s a rhetorical question as I do actually know where it’s gone).

Here are some pictures of our day. 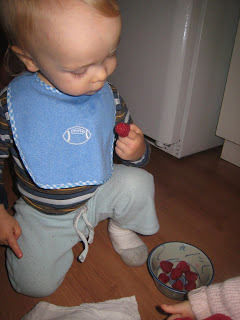 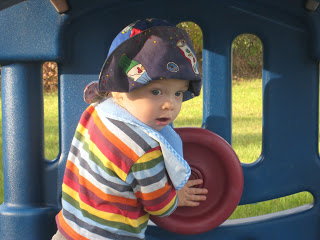 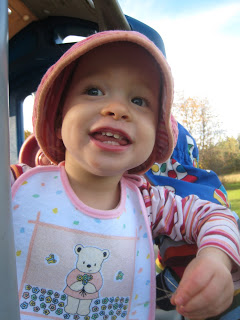 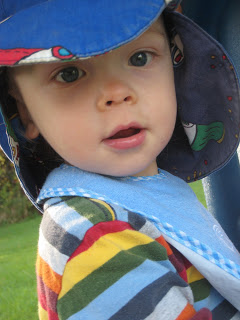 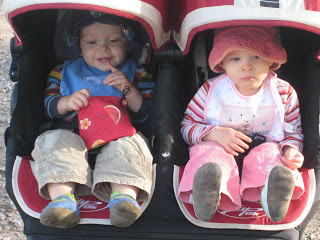 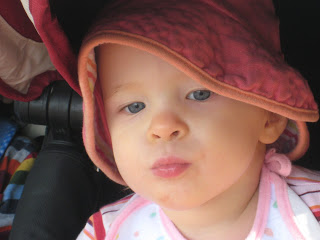 Weekly Drivel from Mexico that Includes a Monkey

It wouldn’t be Monday without Our Weekly Drivel, Except it’s Wednesday.