So the kids are still up (it’s 10:30pm) and there’s no slow down in sight. I must have inadvertently given them caffeine. They are WIRED! Update: They finally crashed at 11pm.

They have learned how to remove all the outlet covers and enjoy spending their days removing anything plugged in, sucking on it and then putting it back in the socket, seriously. Our kids are so smart…

As many of you know, Ed and I don’t have a TV and haven’t had one for over 10 years. It has nothing to do with any religious, social or cultural convictions, neither of us had one when we met and we just haven’t needed one since. We know, we’ve heard it a million times, we’re horrible parents and we’re abusing our kids by not letting them watch TV… next. 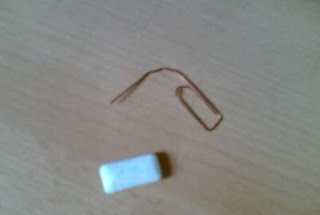 Now, not having a microwave or toaster, well, that’s another story. I’m no Martha Stewart and I rely heavily on these two appliances. Unfortunately, I don’t currently have either. We took ours to Mexico and haven’t replaced them yet. This would be fine if I was McGyver. Speaking of which, I love including McGyver in my daily conversation whenever I can, Ed gets called it often. ONCE I played Trival Pursuit and I answered McGyver to every answer and I kid you not, it WAS the answer to one of the questions (so was Ronald Reagan but that’s another story), something about a show being filmed in Vancouver… SERIOUSLY. Back to me being McGyver, if I was, I could cook up some luxury feast using a wok, rice cooker and pot, but McGyver I’m Not.

What’s up with me and graphics? Between you and me, I’m LOVING them!

P.S. Ed just asked what the “paperclip and gum” graphic was about. HELLO!? McGyver can make a bomb from these two everyday household items. Sheesh.