Bonnie from The Koala Bear Writer

Not only is Bonnie Guest Posting here today but this time, we’re throwing in a twist because I’m Guest Posting over at Bonnie’s Today also!

Two for the price of one.

Once you’re done reading Bonnie’s post about fond memories on the farm, pop over to her blog and read about my Top Ten Questions to Ask a Woman Pregnant with Triplets. Without further ado, here is Bonnie.

———————————————————–
I grew up on an acreage ten minutes outside a small town half an hour away from a big city. My great-grandpa had homesteaded a farm in southern Alberta that my grandpa continued to work until passing it on to my uncle. Although my dad chose the career of an engineer in an office, he had a farmer’s heart and we “homesteaded” our acreage, growing a huge garden as well as fruit trees and raising our own livestock.

We started with chickens when I was six or seven. After all, Dad said, no one can fall in love with chickens. The picture of me—a smiling, dark-eyed, dark-haired little girl watching a box full of fuzzy yellow chicks run around—might challenge that idea. We later heard many stories of chickens dying of old age. Ours didn’t suffer that fate; Dad was a farmer.  He warned us that these chickens were meant to feed us and by the end of the summer, we were tired of daily chores and happy to say goodbye to our chickens.

After a few years of raising chickens, we advanced to sheep. A local farmer who raised sheep for wool had several orphan lambs. Dad said we could help. I still remember riding home in our eight-passenger Chevy van, all three of us kids holding a lamb on our laps. I named my lamb Nibbles and my brother named his lamb Cookie and the third lamb died before the end of the week. We’d lose many lambs over the next few years—they got sick easily, despite our best efforts to take care of them.

By the time I was in my early teens, we were raising chickens, turkeys, a few ducks, sheep, the occasional calf, and one Canada goose. The goose came to us as a little gosling someone found wandering on the road.

Photo taken by John in Portland

They knew we had animals, and so they dropped her off, though we didn’t know what she was until she began to feather out. We wondered what we’d do with a Canada goose—I didn’t have a plane like Fly Away Home to teach her to fly—but she figured that out on her own and took off one fine fall day.

Summers when I was growing up were filled with our animals and the garden and picking apples and playing baseball with friends and swimming at the lake. Now, as I look back at it, I smile to think of the things I took for granted. The price of rhubarb and raspberries in the stores shocks me now because we had more than we could ever eat ourselves. We walked down to the pond whenever we wanted to go skating in the winter, instead of having to check times to drop in at the local arena. I learned to ride my bike on a gravel driveway and ate carrots straight out of the garden and built log forts in the trees at the back of our property and caught frogs in the pond behind our house.

When I think of Canada, that’s what I think of. The wide-open spaces I grew up in, playing hockey and baseball and tag with the neighbour kids, eating food we grew on our own land. I’’ve moved away, lived in other towns and cities, and I still say I’m a small-town girl. I want my daughters to pick saskatoons off the bush and run barefoot in the grass and maybe even find an egg still warm from the chicken that laid it. So, Happy Canada Day to this country I love. 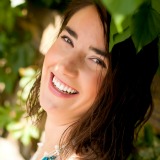 Bonnie is mom to three beautiful little girls and wife to a law student. She’s currently attempting to research and write a historical fiction novel.When she’s not blogging or playing with her girls, she enjoys rock climbing, scrapbooking, and baking. Connect with Bonnie on her blog, Facebook, Twitter, Google+ or Pinterest.

Thank you sharing your story Bonnie!

Want to be Featured?
Contact Journeys of The Zoo!

And Now for The “I Am Canadian” Linky…

If you are Canadian or have a Canadian Product, Cause, Blog, or other Canadian related item, then you are officially invited to add yourself to this Linky.

Note that this Linky is not intended as a Giveaway Linky. Please go here to post or enter giveaways.

Proud to be Canadian at YYZ Bambina (Canadian Feature)