Today’s post is a bit different and really long. I don’t want to ruin the surprise but the power was out all day (shoot, did I just ruin it?) so I wrote today’s post by hand (what horror).

Below are pictures of the pages (I couldn’t scan them because our new printer isn’t connected). Remember, if you click on the picture, they get bigger. However, if you can’t read my handwriting and/or don’t want to strain your eyes, scroll down, I’ve typed everything out (I had to so that I could add it to my personal electronic journal) and continued on with today’s news that I thankfully didn’t have to write out.

As for romance, it’s for people who don’t get hand cramps. 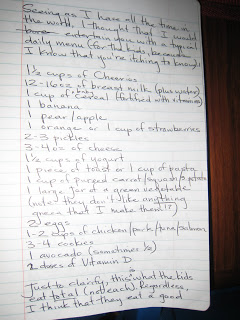 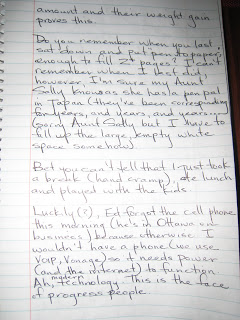 The power has been out since
11am (it’s now 1pm). I’ve done
everything humanly possible
without power (read: nap)

Since I am unable to surf I am
car (lost my train of thought,
new paragraph).

I’ve had to resort to writing out
todays journal entry as the battery
on my laptop is pooched. It sounds
kind of romantic but remains to be
Seen.

Thankfully, I spent all of last night
(well 7 hours), pricing, unpacking,
hanging, cleaning and organizing
everything for our “Mexican party”
this evening. Should be interesting
if the power doesn’t come back…

Seeing as I have all the time in
the world, I thought that I would
bore entertain you with a typical
daily menu (for the kids, because)
I know that you’re itching to know!).

1½ cups of Cheerios
12-16 oz of breast milk (plus water)
1 cup of baby cereal (fortified with vitamins)
1 banana
1 pear/apple
1 orange or 1 cup of strawberries
2-3 pickles
3-4 oz of cheese
1½ cups of yogurt
1 piece of toast or 1 cup of pasta
1 cup of pureed carrot/squash/s. potato
1 large jar of a green vegetable
(note: they don’t like anything
green that I make them!?)
2 eggs
1-2 cups of chicken/pork/tuna/salmon
3-4 cookies
1 avocado (sometimes ½)
2 dose of Vitamin D

Just to clarify, this is what the kids
eat total (not each). Regardless,
I think that they eat a good
amount and their weight gain
proves this.

Do you remember when you last
Sat down and put “pen to paper”,
enough to fill 2 pages? I can’t
Remember when I last did,
However, I’m sure my Aunt
Sally knows as she has a pen pal
In Japan (they’ve been corresponding
For years, and years, and years…
(sorry Aunt Sally but I have to
fill up the large, empty white
space somehow).

Bet you can’t tell that I just took
a break (hand cramp), ate lunch
and played with the kids.

Luckily (?), Ed forgot the cell phone
this morning (he’s in Ottawa on
business) because otherwise I
wouldn’t have a phone (we use
VOIP, Vonage) so it needs power
(and the internet) to function.
Ah, modern technology. This is the face
of progress people.

Back to the “Food List”, I forgot to
mention that we’ve been giving
them more peanut butter it’s just
so messy. Before you go and say
“when you were young, we gave
you peanut butter all the time
and it wasn’t messy!”. I remind
you, that was the time with
linoleum floors, vinyl chairs and
plastic tables (read: hose downable
if completely covered in sticky
fingerprints). For those of you
worried about us giving them
peanut butter, like so many other
recommendations (liver comes to mind)
the “people who know” changed
their minds.

To continue on with the (almost)
everything food post, the kids pretty
much eat all the day. They just ate
half of my chicken sandwich, some
coleslaw and a couple of kalamata olives.

Apparently they are still hungry
(or bored or just being kids) because
they are picking off bits of my rattan
chairs and eating them. Maybe
they just need a little more fibre?

When I woke up from my second nap (in the afternoon), I noticed that one (of several) Webster Dictionaries was in our bookshelf. Thankfully, I spelt “outage” correctly.

Since we live in the middle of nowhere, we don’t have city water and/or sewar. Without electricity, we are at the mercy of the elements. For whatever reason, even after almost 7 hours, our basement didn’t flood (we use a sump pump), however, our neighbours on both sides did!?). Also, without power, we don’t have pressure in our pipes (we have a well). No pressure = No water. Needless to say, I didn’t really enjoy myself today. Ed and I are currently in negotiations to buy a generator (I want one, he has better ways to spend $1,200).

In the evening, we held our “Mexican Extravaganza Party”. Here are some pictures of the garb. Unfortunately, my camera battery died (isn’t that always the case), right before everyone got here. There is SO much more stuff! Everyone was so excited about all the stuff and we raised enough money to spay two females. One dog at a time…

A few people missed the event due to flooded basements and conflicts. In turn, we will be hosting another Extravaganza in the next few weeks.

Yesterday we went on a walk and took the kids in one of their many forms of transportation; the green wagon (not to be confused with the Zoomobile or red, white and blue wagon otherwise known as the “USA Mobile” that has yet to make an appearance). We’re thinking of getting the dogs harnesses… Ed’s shirt reads: Vegetarian, An Old Indian Word for Poor Hunter. 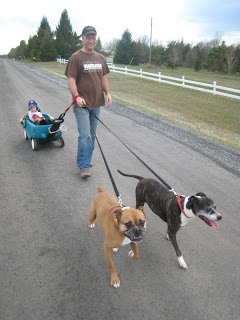 P.S. I couldn’t come up with anything… the tv stays. There, I said it.