On Thursday, we’ll have been in Mexico for four weeks. Four. It seems like only yesterday that we were getting ready for our 5,000 km road trip. Just this morning, Ed and I were talking about the psychology behind “how the older you get, the quicker time flies” (seriously, there is a psychology behind it). But that’s not what this post is about.

Since we’ve arrived, I’ve taken a total of three pictures. Three. Considering I usually take 30 a day, I’m a bit behind schedule. You saw two of them in yesterdays post about Max and the Ongoing Mexican School Saga (P.S. I provide an update below) and this one. 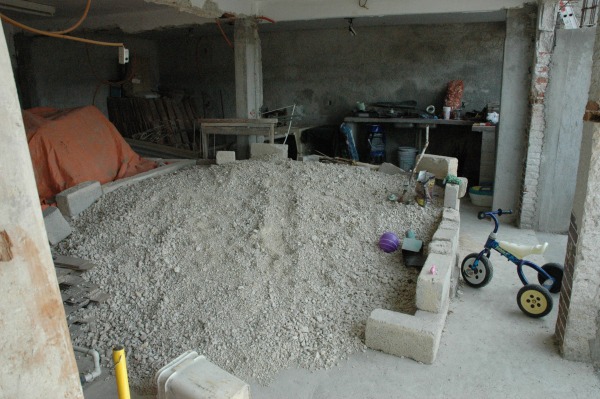 The reason I haven’t been taking pictures is because I’ve been moving this DUMP TRUCK load of gravel (equal to 5 cubic metres of rocks). One small bucket at a time (an example of which is lying on it’s side in the bottom left of this picture).

This pile of gravel (as well as a dump truck load of sand) has been in our dining room since 2008. Six years. Six. Since Uncle Kevin and Liz are coming for a visit next week, we figured that there was no time like the present to make some room for a table to eat, install the kitchen sink (you can see the bottom of the double sink in the top middle of the picture but it’s not installed) and a toilet. Potty’s are highly overrated.

In case you didn’t know, our house is a duplex. We live in the third floor apartment (with three bedrooms, kitchen, living room and a bathroom) and you are looking at a picture of the second floor (there is also a first floor, obviously). It will eventually have five bedrooms, three bathrooms, two chimneys a huge infinity terrace and spiral staircase to the roof that has a view of the entire city of San Cristobal de las Casas like this. 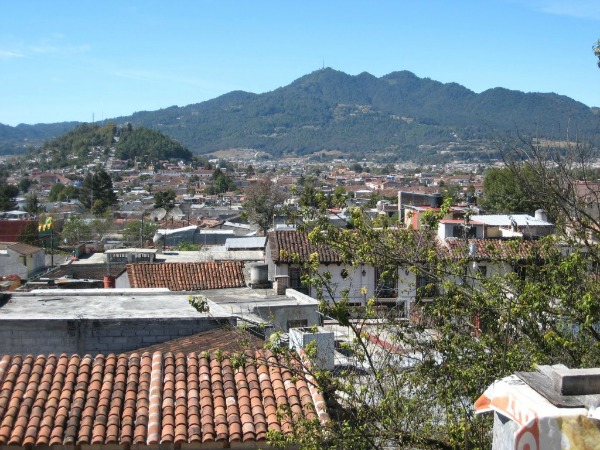 Starting tomorrow, we’ll be taking a break from renovations on the inside and heading out on the street.

Remember how they were tearing up the street last year? Well, they forgot to install one of our stairs (it was actually located ON the street) and now we can’t get into our upstairs apartment without a stool and we have to lift the dogs up and down every day. And, they lowered the street so much that they left a 45 degree slope to get in our garage and the van no longer fits. Note that these are just two of the eight things that I eluded to yesterday in my post. Unfortunately, the engineering company is long gone so we have to pay for this ourselves. Note that I will take before and after pictures of the renovations.

Update on Max. This morning, Max announced that he was not going to school. I informed him that he had to go because I’d purchased him a breakfast program for the week (that’s the only option) so he had to go. He responded with “oh” but I wasn’t convinced that this was a good enough excuse. He got dressed and walked to school. At the doors, he announced that he wasn’t going to school. I had Artemis take his hand and lead him to his classroom. All and all, he had a great day. The little crapper that wouldn’t let them use the slide yesterday was up to her old tactics but The Kids just went down the slide anyways. As for the breakfast program, Max didn’t like the look of the taco so he refused it. Good thing that I’m paying for the program… As for Artemis, she loved it. As it stands, I’ve told him that he needs to go to school this week to be a part of the breakfast program and that on Friday we’ll talk about going back to school next week. I hope that something changes over the next three days but I’m not holding my breathe. The saga continues.

Forgive me for not taking too many pictures…

When Your Child Doesn’t Want To Go To School

Is the Second Time a Charm When it Comes to School in Mexico?

What I Learned From A Classroom of 5-Year Olds #Mexico